POF's improved training mode is a great tool for training, but I was always frustrated by a few limitations. One, the interface doesn't detect button releases. This means that when doing a negative edge special move, you can't see when you release the button.

The second problem is that frame count isn't shown. You don't know how many frames each input was done far. 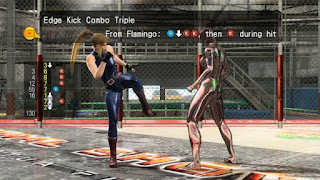 I wanted to have a similar interface for Super Turbo. 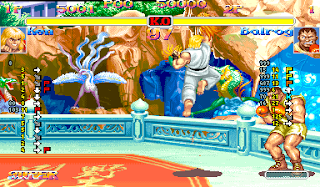 Let's go over the features in detail. First, if you're standing and idling (meaning no inputs), you'll see a counter in grey showing you how many frames you've been idle 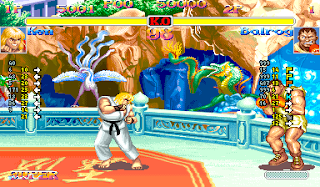 In this image, Ken has been idle for 40 frames as you can see from the grey number "40" at the top left. The counter stops at 999, as you can see for Boxer on the right.

The next feature is button release tracking. 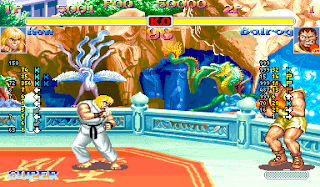 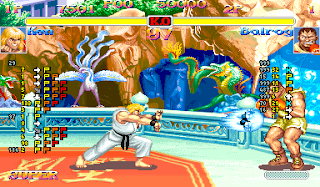 Here, Ken is doing a piano negative edge fireball. You can see left midscreen, the grey 97 shows that he was idly for 97 frames. At this point, he presses all three buttons. First he hits and holds light punch for one frame, then light and medium punch for three frames, and then finally all three punches for 133 frames. He then does the fireball motion while holding all three punches. The fireball motion finishes with the stick in the towards position with all three punches held. Then one frame later, he release heavy punch, triggering the fireball special move. He then releases medium punch one frame later, and finally light punch seven frames later.

Another feature is frameskip tracking. Super Turbo skips frames. Even if the display shows only one frame, the engine might run two frames.Thanks to Born2SPD, I was able to account for skipped frames ensuring a correct frame count.

This is all great, but how do I actually run this?

I've put the script up on github here: